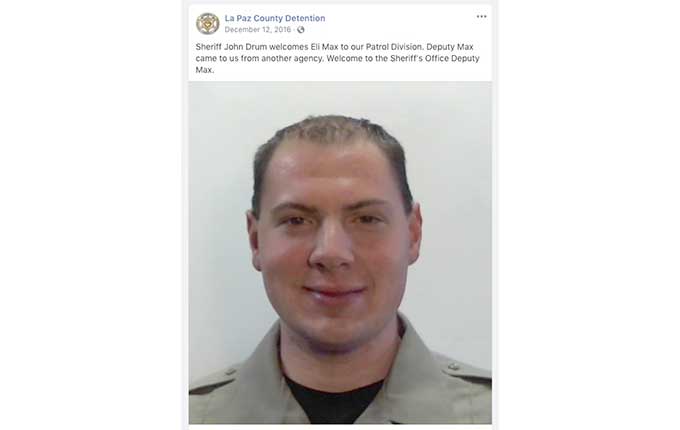 A white Arizona sheriff’s deputy is under investigation and has been placed on administrative leave for pulling over a black driver because he had an air freshener hanging from his rearview mirror. The deputy, named Eli Max, made the driver get out of the car and began interrogating him for a half an hour about drugs and weapons. Deputy Max asked the driver where he was going. Deputy Max also accused the driver more than once of being “nervous” and asked to search the car since nervousness was a sign of “deception.” He also gave the driver a sobriety test. Fortunately, the driver recorded the encounter.

When the news department of ABC15, an Arizona TV station, asked La Paz County Sheriff’s Office for a comment, the sheriff’s office replied:

“Yes, we obviously are looking into the complaint; we are taking this matter very seriously. Deputy Max has already been placed on administrative leave and our detectives are in the process of investigating the complaint. If we determine that the Deputy was at fault, we will look into the training methods to determine if this was a training issue or possibly an officer making up his own methods. When the investigation is complete, I plan on providing a press release that will detail our findings.”

City of San Antonio to pay $205,000 after cop searches woman’s vagina on a public street

The city of San Antonio agreed to pay a woman $205,000 to settle a lawsuit alleging that a police detective pulled down her shorts in public and conducted a drug search in her vagina in front of other male officers. The detective accused of conducting the illegal vaginal cavity search, Mara Wilson, was never reprimanded by […]

Eddie Martins and Richard Hall, the two former New York detectives who pleaded guilty to accepting bribes and nine counts of “official misconduct” for having sex with a handcuffed 18-year-old woman in the back of their unmarked van while she was in their custody, will get no prison time, reports CNN. State Supreme Court Justice […]

One of the reasons most law enforcement organizations favor drug prohibition is that it gives them a reason to arrest (or in some cases, shake down) people who pose no danger to society. Busting someone for drug possession is such an easy way to nail a person that some cops even plant drugs on people. […]

Whether you own or rent your place, insurance on that home is a necessary hassle – but a new tech-driven company called Lemonade is starting to show that while it might indeed be a necessity, it doesn’t have to be a hassle. Here’s the way insurance typically works: You pay premiums and hope an accident […]

People tend to keep luggage around for a long time. And why not? New suitcases are pricey, and no matter how banged up or patched up that old bag gets, it still holds your clothes. Right? Maybe not. Here are 15 travel bags and accessories that make a strong case for upgrading your gear. They’ve […]

Do you own a Mac? Unless you’re using it for a paperweight, you almost can’t afford not to get the Magnificent Mac Bundle. It’s a roundup of some truly essential security and file management apps, bundled up with great photo and video enhancers. The best part is that all nine apps are potentially available for […]