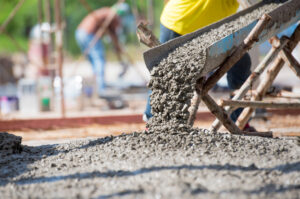 We Use A Lot Of Concrete

I spent this Labor Day at one of my favorite museums. You really can’t help but learn something useful every time you go there. I’d gone in already having a pretty good idea as to what I’d be writing about this week, and as luck would have it, stumbled upon a little something that helped me along in my research.

Each year, we use three metric tons of the stuff for every person on earth. That’s a lot of concrete. Reinforced concrete is the world’s most common building material, and ever since French gardener Joseph Monier came up with the stuff in 1867, the artificial environment we construct for ourselves has never been the same. Thanks for the helpful background info, Science Museum!

Concrete Is Awful For The Earth, But What If You Could Make It Out Of Ganja?

While reinforced concrete has proven terribly useful over the last century-and-a-half, it’s also proven terribly, well, terrible in terms of its environmental consequences. Cement makers can take credit for about seven percent of global carbon dioxide emissions. The limestone kilns required to produce cement, and therefore to produce concrete, are not exactly ecofriendly. The carbon dioxide released into the atmosphere in the process of making cement weighs half as much as the cement produced, according to the European Cement Association.

Now, bear with me here, because a possible solution to this problem at first sounds like a half-baked idea that came from your fully-baked friends: what if we just all built our houses out of weed?

Thanks to some wonderful reporting from Bloomberg, we now know that this is sort of already a thing. It is not actually marijuana that is being used as a building material, of course, but rather marijuana’s industrious (and non-psychoactive) cousin, hemp.

Hemp is a pretty useful plant. In addition to its many other applications, hemp has been used as a building material since the days of the Roman Empire, when engineers mixed its strong fibers into the mortar they used to hold up bridges, many of which stand to this day. In newer structures, we use modern hempcrete, a combination of the inner woody core of the hemp plant and a lime-based or clay-based binder. Like its reinforced concrete antecedent, hempcrete was also developed in France.

Fully cured hempcrete weighs only about a seventh or an eighth of the weight of concrete. Compared to their concrete counterparts, hempcrete buildings have better temperature regulation, ventilation, and fire resistance. Maybe best of all, hempcrete is carbon negative. Growing hemp absorbs CO2, and the plant continues to soak up carbon as it’s mixed with lime or clay. According to Canadian builder Just BioFiber, each cubic meter of its hemp-based structural material entraps 287 pounds of carbon dioxide, which is more CO2 than is emitted during production.

Maybe The U.S. Should Get Over Itself And Stop Ceding The Hemp Market To Europe And Canada

Hempcrete is not a replacement for concrete in all circumstances. It does not have the same load-bearing capabilities of traditional concrete. Still, in Europe, buildings as high as 10 stories have been built using hempcrete.

Hemp’s proven utility abroad is finally winning it some fans again in North America. The Northern Alberta Institute of Technology reported that Canadian hemp sales reached $140 million last year, and could hit $1 billion within five years. In the United States, over the last half-century growing hemp has been largely illegal because of its resemblance to marijuana. However, the 2018 Farm Bill removed hemp from the controlled substances act and legalized its cultivation under certain circumstances. A number of states have since taken steps to ramp up production, although at this point it’s still a bit of a legal nightmare to actually get from a hemp seed to a building component in the U.S. Only a few dozen homes nationwide contain hemp as a building material.

Hempcrete is a hearty, sustainable, environmentally friendly, and profitable building material that can be produced in close proximity to the buildings it is actually used to construct. Sounds like a good way to help out the struggling farm economy, and maybe even gin up some work for the legal industry in unentangling over half a century of misguided regulation.

Jonathan Wolf is a litigation associate at a midsize, full-service Minnesota firm. He also teaches as an adjunct writing professor at Mitchell Hamline School of Law, has written for a wide variety of publications, and makes it both his business and his pleasure to be financially and scientifically literate. Any views he expresses are probably pure gold, but are nonetheless solely his own and should not be attributed to any organization with which he is affiliated. He wouldn’t want to share the credit anyway. He can be reached at jon_wolf@hotmail.com.

Love ATL? Let’s make it official.
Sign up for our newsletter.