A new report from the CDC shows how unregulated markets may be contributing to the vaping crisis.

Brought to you by MJBizDaily

Health officials reported on Friday that the majority of those sickened in the vaping health crisis used cannabis vape products containing THC, and many of those in the first two states to report illnesses – Illinois and Wisconsin – said they used counterfeit marijuana products from the illicit market, not licensed MJ companies.

The revelations, contained in a report issued by the Centers for Disease Control and Prevention (CDC), underscore what’s been a debate since the first vaping illnesses were reported in August – whether the nationwide illnesses are coming from the legal, licensed marijuana market or from unlicensed, black-market products.

RELATED: I Smoked A Black Market Vape. This Is Why I’ll Never Do It Again

Marijuana industry officials have blamed the black market as the culprit behind the hundreds of illnesses and 13 deaths reported so far.

And industry officials have criticized the recent decision by Massachusetts to impose a four-month ban on the sale of all vaping products.

“By banning cannabis vape products that are produced according to state regulations, it significantly increases the likelihood that individuals will seek to purchase those products from unregulated sources,” the Cannabis Trade Federation said in a statement Tuesday. 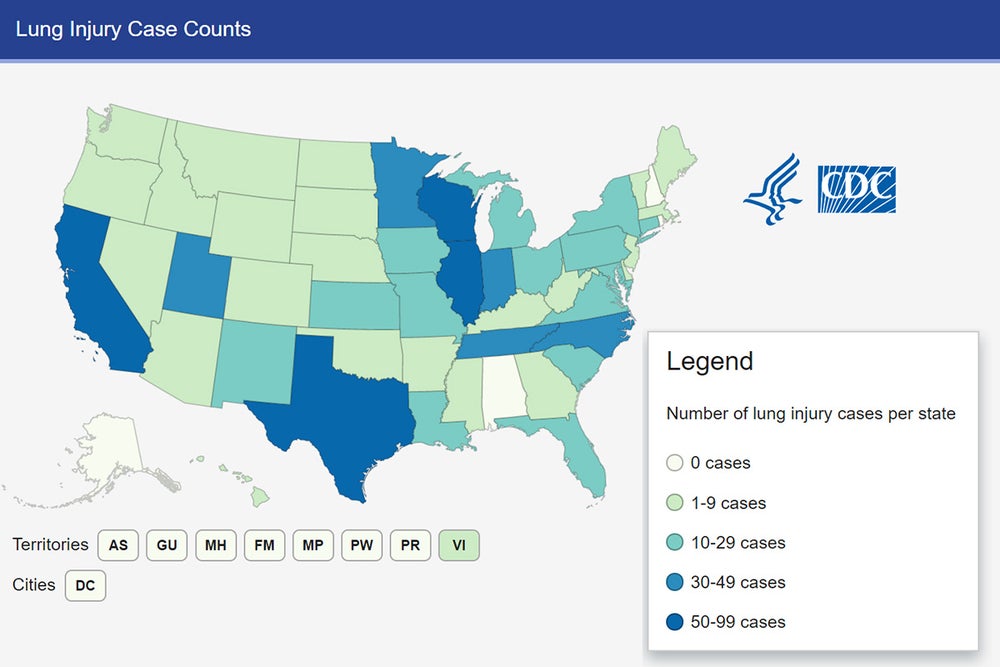 Others reported using a combination of THC and e-cigarettes containing nicotine.

In Illinois and Wisconsin, which were the first states to report vaping-related illnesses, officials interviewed 86 patients; 87% of them reported using vape pens from the illicit market that contained THC during the three months before getting sick.

“These data reveal a predominant use of prefilled THC cartridges sold through informal and unregulated markets, although the origin of these products further back in the production and distribution chain is unknown,” the report states.

The report goes on to say that it’s unclear if the cause of the illness is THC or “a substance associated with prefilled THC cartridges, such as a cutting agent or adulterant.”

RELATED: How Vape Manufacturers Are Striking Back Against Counterfeits

The additive vitamin E acetate has been pointed to as a possible cause.

No patients reported adding any substances to the cartridges. And no single brand was named by all patients, but Dank Vapes was mentioned by 66% of them.

According to the CDC, Dank Vapes are counterfeit THC cartridges that can be purchased “easily” online.