What animals can teach us about staying present, facing fear, and accepting joy.

Over a decade ago, a feisty little Arabian horse named Buddy galloped into my life and changed everything. His past—except for a couple of years with my neighbor—remains a mystery, but the first time I laid eyes on him I was utterly smitten (or we could safely call it a swoon). White mane and tail swirling, gray dapples on his haunches, and expressive eyes. 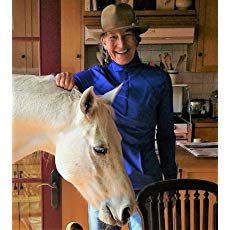 How he came to be mine is another miraculous story, but how he has come to occupy my emotional and physical life astonishes me daily.

Not long after that first Buddy sighting, I was diagnosed with cancer. Embarking on a long haul of treatment, I gravitated toward Buddy like a tulip to the sun. I didn’t ride him then, of course—I was in no shape to do so—but it was summer and at the urging of my neighbor, I’d wobble over to Buddy’s meadow and sit under a shade tree while gulls circled in the sea air.

Though a high-spirited fellow, Buddy seemed to sense my distress, and he’d push his mule friends aside to stand calmly by me. Sometimes he’d nod off, as if we’d known each other for years. There was power in just being with him, his horse breath tickling my neck a welcome balm.

Those quiet afternoons alerted me to the fact that this horse had something more to offer than a beautiful body and possibly a slick back to ride on. His company alone was exactly what I needed: stillness, acknowledgment without pity; a steady breath. Buddy offered this without expecting a thing in return.

Now, years beyond that illness, I carry his gift with me as I sit with friends, family—even strangers—in their own travails. Recently when my friend Katie was dying, I was privileged to accompany her to the edge, often in silence or with music she chose—and just breathed with her. I felt no need to “do” or “say” anything. I merely sat still and offered her my company. Just as Buddy had done for me.

My horse has continued to lead me into new territory—with relationships and in my own life. Last week, for instance, we rode off to the beach. A steady wind blew down the Strait of Juan de Fuca, the sky and sea horizontal bands of gray. Buddy’s always been skeptical of waves. In fact, when we were first pals, he would refuse to go beyond the field that leads to the beach, much less the sand. According to Buddy, waves—even tiny ones—are dangerous and unpredictable. That might seem silly to us, but if we dismiss a horse’s fear, we’re missing a big part of who they are. After all, horses have survived for millions of years solely because they are flight animals. With any real (or perceived) danger, their first impulse is to run, which has saved them from many a saber-toothed tiger.

I dismounted and led Buddy to the beach—he’s long since felt confident there, but I wanted him to see if this time he might step a toe into the water, stretch what courage he already has. We were able to get about four feet back from the breaking waves. I didn’t force him; I only invited him as far as he could comfortably go. One wave made a particularly crashy smash and he snorted and jumped back. (You never know about those tigers.) He was already wary about the next one.

So I took off my glove. Right away his ears perked up. Immediately he forgot all about the water, and when the glove landed within a foot of the next wave, he was already plotting his victory, stepping confidently toward the moving water, just inches from his feet, and with a flourish, he rescued the gauntlet. He waved it up and down in the air, turned around and delivered it back to my hand. I laughed out loud. Oh, and that’s another thing Buddy has taught me: laughing is good. Especially when fear is part of the picture. It was clear that Buddy was pleased with himself after his little fetch, and the waves were no longer threatening.

Seeing him face his fears has helped me with mine. There were days during that cancer treatment when everything seemed scary, from surgery to chemo, but there were also moments with my sister when we laughed so hard the nurses wondered what we were up to, like when  I started singing “Ol’ Man Chemo” to the tune of “Ol’ Man River” in the infusion chair. One might call it a distraction, but in truth our laughter was more real than the fear. To laugh is to step back and observe the fear rather than letting fear have its way. So there was Buddy, facing the wave-tigers by changing his thought. At that moment he was not being pursued; he was pursuing the glove!

Full disclosure: Buddy loves picking stuff up: gloves, hats, scarves—even if I drop one when I’m mounted. He’ll snatch it up with his teeth and turn his head around to hand it to me in the saddle. It’s impossible not to laugh.

Unlike humans, horses are always in the present moment. There really isn’t a reflective past or future for them. That’s why they are always so alert (tigers, again).  Buddy in the present helps me to be there, too. This is what is happening now I say to myself. Not what I’m wanting that moment to be. Or what it once was in the past. Yesterday’s small victory at the beach was more valuable than any agenda I might have had. With horses, almost every difficult situation, from spooking to refusing to load in the trailer, has more to do with fear than with bad attitude.  Years ago, my teacher Ken, a seasoned horseman, asked me a crucial question “Is Buddy saying, ‘I won’t’ or ‘I can’t’? There’s a big difference.”

I could have forced Buddy to make one step or more into the water, but how confident would that make him next time? And how would he feel about me?  Our collaboration made both of us happy. By my noticing Buddy’s body language (worry in his eyes, a tension in his haunches), we ended up having a mutual success, leaving the beach calm and confident. Next time he’ll be willing to go closer, maybe without the glove. It sure gives me (and Buddy) space if I give attention to the moment, not the outcome.

In my professional life as a teacher and personal coach, I am a better teacher if I’m not too attached to my plan for a class or a one-on-one session. Otherwise, I can totally miss what might be a more pressing issue. A couple months ago, I was teaching a class in Seattle, and I had planned that morning to concentrate on the craft of braiding two stories together. After hearing some of their work aloud, however, and noticing the frequency of abstraction in the writing, I totally switched my game. Instead, I had them describe any two objects that lay on our conference table. It ended up changing the whole tenor of the class and later harmonized perfectly into their braided stories. Paying attention to specific detail (like the glove) allowed them to access the larger themes.

The larger matters in life are usually found in very small things. In one of my first lessons with Ken, he arrived on a cold November morning. Buddy was grazing around the edges of the round pen. Buddy lifted his head, a hunk of grass hanging out of his mouth mid-chew. When Ken slowly approached, as if sensing the invisible bubble around Buddy, Ken noted Buddy’s ears pinned ears and stopped for a moment, stepped back. There was a slight give in Buddy when Ken paused, and in a flash, he perked his ears forward as if to say, “Thanks!” He actually took two steps toward Ken.

“Buddy’s just appreciating that I didn’t barge in,” Ken said, pausing another beat, then offering his hand for Buddy’s nose to greet him. “There’s no reason to force. He’s so sensitive he can feel me from a long way off. We’d prefer to have him choose us.”

But Ken pointed out it goes both ways “You don’t want a horse invading your territory either. We’d like to think a horse is being affectionate when often he’s actually crowding in—like right now—without your inviting him.” Buddy had been lipping at my sleeve. Ken straightened up tall, slapped his hand against his jeans, and held up his hand, palm out, quietly moving his forefinger side to side. That gesture alone was enough to get Buddy’s attention and he stepped back. When Ken lifted an eyebrow Buddy willingly backed up two steps.

Ken went on to say that “when it comes to being respectful of a horse’s space, you’d think it would be women who would know about such things.” He shook his head and smiled. “But it’s the girls who want to molest their horses, plunder them with petting and kisses.” We both laughed, but I was guilty of the same thing.

I admit that Buddy’s body still makes me swoon. I have come to know where he flinches (his belly), what gives him pleasure (gently scratching his chest), and where to lay my hand on his forehead so he breathes out and relaxes. And when I whistle and he canters in from the field to greet me, he is the embodiment of joy.

Yes, there’s that old nudge-nudge-wink-wink remark people make about “Oh – girls and horses….” As a horse-riding teenager, I always resented those comments. But now, decades later, I wonder if, with a horse, a girl first understands what it means to become one with another body—without the predatory component of many first sexual encounters. And perhaps, as in human love, we are attracted to those creatures who appeal to our own personal tastes — literally. When I sat with him that summer under the shade tree, my body in crisis, afraid of the future, little did I know what he already knew. And what I’d come to know; I thank him every day.

Christine Hemp is the author of the memoir Wild Ride Home: Love, Loss, and a Little White Horse.