Following is a transcript of an episode of Business Insider Today. Watch the full episode here.

It’s the design of a biotech company that uses mushrooms to make eco-friendly packing materials, leather, and even bacon.

Mycelium, as it’s called, is basically the root structure of mushrooms.

Mycelium is unique because it’s easy to both grow and shape into different forms.

At Ecovative Design in Green Island, New York, engineers, biologists, and designers are harvesting its potential to reduce plastic consumption and feed the planet.

Foto: The biotech firm Ecovative Design is designing a packing material made from mycelium, made from the root structure of mushrooms. Source: Scott Elliott for Business Insider Today

Their first product, a packaging material made from mycelium and agricultural waste, is a lot like Styrofoam, and can be used to package anything from a computer to a candle.

The difference is that Mushroom Packaging only takes 30 days to compost. Styrofoam fills up an estimated 30% of our landfills and takes at least 500 years to biodegrade.

Their second product, MycoFlex, is a foamy structure of pure mycelium. It can replace polyurethane products like makeup sponges or be pounded down to create a leatherlike textile.

The third product, Atlast, is a meatless alternative to chicken, steak, bacon, scallops, clams – you name it.

Eben Bayer, Cofounder and CEO of Ecovative: “In addition to using less water, the process occurs much faster. So it takes a couple of years to raise a cow or a pig. I used to raise pigs in Vermont. We grow our mycelium meat in just 10 days.” 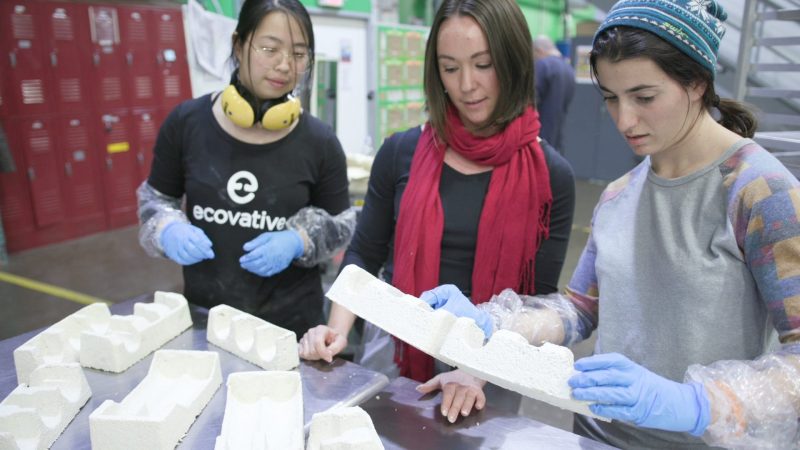 Foto: The process for growing plant-based leather and meat starts in growth chambers like this one that mimic soil conditions. Source: Scott Elliott for Business Insider Today

Eben Bayer and Gavin McIntyre founded Ecovative Design in 2007. Their idea to develop mycelium into an alternative to Styrofoam was inspired by Eben’s childhood on a farm in Vermont, where one of his chores was to shovel wood chips into a furnace to boil maple syrup.

Bayer: “In the spring, fungi would grow, and they’d turn the wood chips into these big clumps, which were a big pain in my butt because they blocked the tractor bucket. And so I’d known that mycelium could be really tenacious and strong.”

The process for creating Mushroom Packaging isn’t too far off from those fungi in the woodpile. Agricultural waste products like wood chips, corn husks, or hemp are mixed with mycelium in a mold, watered, and incubated for nine days.

The process for growing mushroom leather or alternative meat products is a bit different because here, the mycelium grows up and out of the agricultural waste.

The mixture is placed in what Ecovative calls vertical farms – growth chambers that mimic the conditions of the soil, tricking the mycelium.

Andy Bass, director of marketing at Ecovative: “What it’s really trying to do is grow up and punch out through the earth to form a mushroom, but we keep the environment such that it just grows and grows into this large marshmallow-like structure. This is pure mushroom tissue at this point.”

The folks at Ecovative call it “aerial mycelium.” After harvesting, this tissue will be taken to the kitchen, cut into slices, compressed, and seasoned.

Bass: “It fries up and gets crispy, just like bacon, and tastes pretty amazing too.” 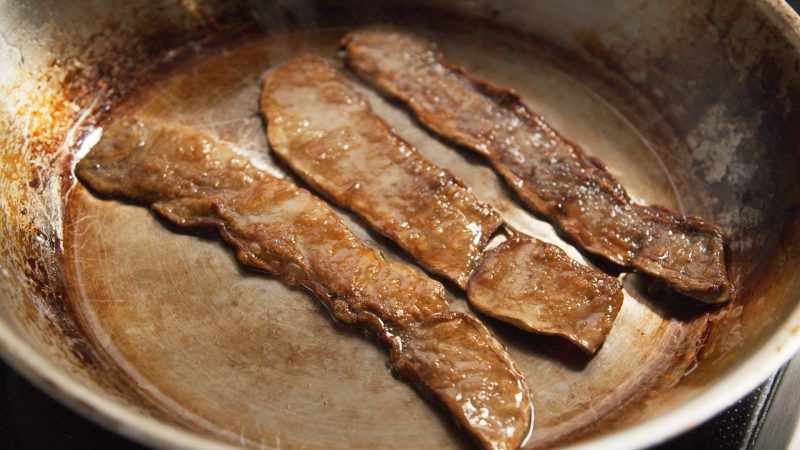 Consumers are hungry for products like mushroom bacon. Last year, US retail sales of plant-based meat were up nearly 10%, while conventional meat sales grew by only 2%.

Ecovative calls mycelium a “super ingredient.” It’s high in fiber and has the same protein content as a slice of bacon.

And it can be grown at the competitive price of $1 per pound.

Ecovative says that mycelium’s greatest potential lies in its texture. It can mimic whole cuts of meat, as opposed to most other plant-based meats that come in the form of minced patties or sausages.

Bayer: “I firmly believe that the best technology on planet Earth is nature, and that if we harness natural technology, we can live better lives with better food and better materials at no cost to the planet. And I think we’re now starting to do that, but we’re just scratching the surface.”