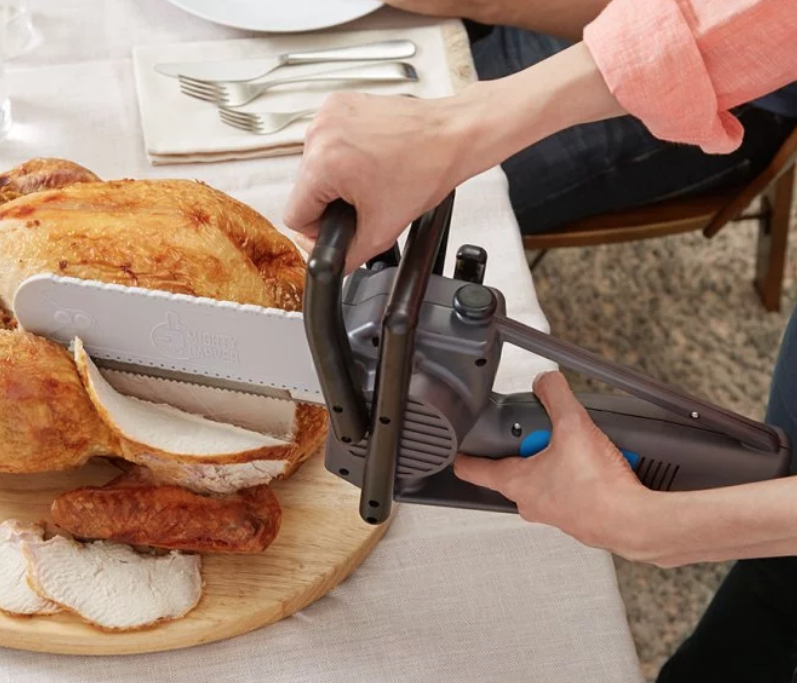 The Mighty Carver electric knife ($59.95) might be the most badass way to rip into the holiday bird, besides using an actual chainsaw.

Here’s how it came to be, as told by its creator, Kimberly Burney:

At Thanksgiving dinner as far back as I can remember, I would get out the electric carving knife for Grandpa. He would carefully carve the turkey to serve the family. This is a wonderful tradition shared by most Americans. But Grandpa’s been gone for a year now and at the last Thanksgiving dinner I asked, “Hey, who wants to carve the turkey this year?” No one looked up, no one said a word. I thought to myself, come on you guys, you all love power tools, what is the problem? Then it hit me. “If this were a chain saw, you boys would be fighting over who gets to carve the turkey.”

It’s also good for slicing up bread, fruit, and god-knows-what-else in the most glorious fashion ever!

image via The Grommet

Do you remember when Barney parade balloon ate it during the Macy’s Thanksgiving Day Parade in 1997? The internet sure does. Footage of the schadenfraude-inducing incident is making the rounds again, proving that hating on the annoying purple dinosaur is timeless. The day after it happened, The New York Times reported the accident was due […]

And in accordance with tradition, Uncle Bill will now lead us in “A Thanksgiving Prayer” (1986).

If you’re planning on taking a salad to your Thanksgiving potluck this year, be wicked careful of what you throw into it: The Centers for Disease Control is currently warning everyone, frigging everywhere to avoid romaine lettuce as if eating it could dose you with E Coli… because there’s a pretty decent chance that it […]