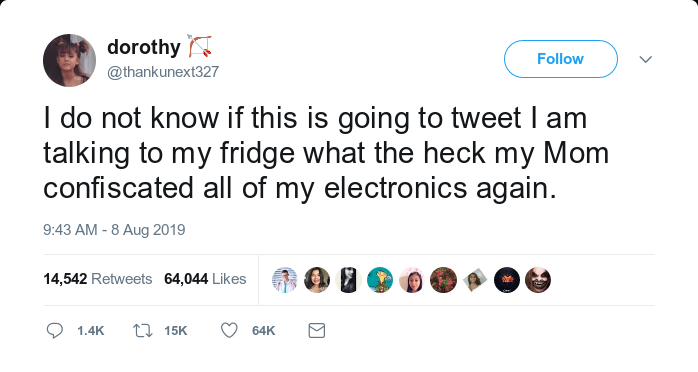 Dorothy is an (alleged) 15-year-old who has attained Twitter fame by hopping from device to device as her mother finds and confiscates her tools: first her phone, then her Nintendo, then her Wii U, and finally, her family smart fridge.

She’s using the hashtag #FreeDorothy, and periodically her accounts have been taken over by her mother, who took the opportunity to scold her for her disobedience.

After sending a tweet saying her mom had taken her phone, another tweet was published, seemingly from her mother, stating: “I seen [sic] that Dorothy has been using twitter on her Nintendo. This account will be shut down now.”

Dorothy then sent a tweet saying: “my mom took my phone and my nintendo ds so i have no choice but to use my wii … thank u all for the support and love.” The tweet’s source label, which indicates the device from which a tweet was sent, confirmed that the tweet came from a Wii U.

Finally, after her mother apparently took her Wii U away as well, she sent a tweet from her LG Smart refrigerator: “I’m talking to my fridge what the heck,” she said.

The Washington Post’s Drew Harwell takes a deep look at the the use of facial recognition products like Bunk1 at summer camps, in a deliciously terrible piece that alternates between Bunk1’s president Rob Burns and Waldo Photos’s founder Rodney Rice explaining that everyone loves this and it makes everyone happy, and counsellors, parents, campers and […]