Trippy Treez gives us a glimpse of what it’s like to survive and thrive as a social media weed warrior.

This story appears in the December 2019 issue of Green Entrepreneur. Subscribe »

Trippy Treez and I are sitting at the newly opened OG Cannabis Cafe in West Hollywood. We’re sharing a watermelon indica pre-roll and discussing how annoying it is to get weed stuck under long fingernails.

She teaches me how to open the pre-roll packaging by using my teeth — which sparks an idea for a new Trippy Treez video on how to roll a blunt without ruining your manicure. Then she tells me that she once made a video on how to keep your lipstick on while smoking throughout the day.

When you post videos and photos with hundreds of thousands of views almost every day, everything is fodder for content. Teresa (who doesn’t want her last name used for fear her mother will find out what she does for a living) goes by “Trippy Treez” on social media, with more than 220K followers on Instagram and 75K subscribers on YouTube — numbers that grow daily. She’s part of a growing circle of cannabis evangelists that companies are now tapping to help sell products.

Related: Will the Cannabis Industry Be the First True Gender Equalizer?

From Taxes to Tokes

Despite her sexy media persona, Teresa is down-to-earth and doesn’t seem to have let the fame go to her head just yet. She also isn’t what you would associate with a typical stoner — not only in her glamorous appearance but also in her relatively conservative background.

A few years ago, recreational cannabis was still illegal in California, and Teresa was doing all the things she was “supposed” to do, including avoiding it — mostly. An L.A. native, she had just finished college with the goal to become an accountant, like her parents wanted. But the entry-level salary of around $35K a year wasn’t cutting it, so she took a side job to earn extra cash. “I happened to have a friend who needed some help at the time with trimming weed. It [eventually] became more ongoing, [and] I started helping out, like, actually growing the plants and watering them.” She earned up to $1,000 a night trimming.

Teresa was terrified of her parents finding out that she was involved in cannabis, but at the same time the excitement of breaking the rules led her to start posting images of herself with weed on Instagram. She created an online persona — Trippy Treez — and started to secretly post images of herself alongside her work. “I was illegally taking these photos,” she says. “I’d wait until no one was looking and take a selfie real quick, or a video of me trimming or with a blunt.”

At first, Teresa had no plans to become a cannabis influencer, a concept that didn’t even exist back in 2014. But as her social media following began to grow, she began to think she might be onto something. “There was a huge lack of creative cannabis content — and also women [in] cannabis.” When California legalized marijuana usage, brands began to slowly reach out to her to endorse their products.

Eventually, the money got so good that she ditched the day job and committed to making her content as creative as possible — working with clients at brands, brainstorming ideas, and booking photographers and videographers to help capture her concepts. 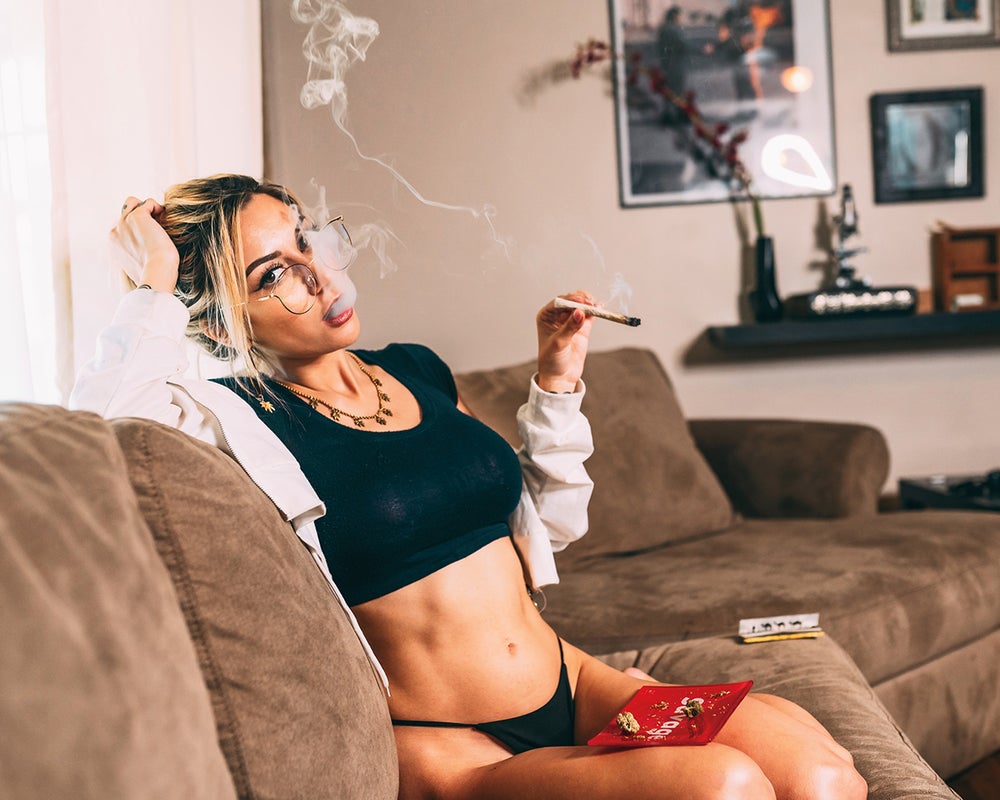 A Day in the Life

Though you may think being a successful cannabis influencer involves only hourly dabs and giant bong hits, Teresa explains that it’s actually a lot of hard work. Her typical day starts with a bong hit, naturally. But then she moves straight into answering her emails and planning content. If the day includes a photo shoot or a video, she spends a lot of time coordinating outfits and accessories with the products she’s working with — being as meticulous as possible. “Let’s say a vape pen has a pink accent in it. I will go and find a pink outfit, or if there’s a silver accessory on [it], I’m going to buy silver jewelry to match. I make it super detailed. I feel like that’s really helped elevate the content.”

Teresa believes her meticulous approach to her content is why brands love to work with her. Last Halloween she showcased a cute MJ Arsenal bong while dressed as a cat in a witch hat, demonstrating how to use it. “I feel like my ideas come from outside, so I’ll be online all the time looking at different kinds of websites and what’s trending and stuff. And then I’ll always be out, especially on Melrose,” she says. She cites the beauty industry as her biggest inspiration. “They’re kind of the most advanced, and they understand how it works, so I’m just kind of taking notes from the different industries and trying to apply it to cannabis.”

There are many types of cannabis influencers, but perhaps what makes Teresa stand out is that she tries to add her own glamorous twist. “Not to say anything about them or anything, but I just felt like [other influencers weren’t] really creative. No one was doing any photo shoots — especially taking the Hollywood, L.A. kind of lifestyle; I’m sort of mixing fashion and luxury with it,” she explains.

Related: What Cannabis Businesses Can Learn from the Sex-Toy Industry

One of the best things about being an influencer is getting plenty of free product. “I definitely get a lot of vapes, rolling papers, and lighters sent to me,” Teresa says. She once received a huge infinity waterfall bong, which she has on display in her living room next to a gold bong that has a Gucci design on it, which is completely “on brand” for her.

Trippy Treez is in demand; that brings in the cash. Teresa claims to make more than six figures a year through branded content. Though the cannabis influencer industry has come a long way, it’s still a small circle. “Back then, I wouldn’t even be able to count on a hand other influencers or smokers,” she says. Today, Teresa is friends with many of the other known influencers — you may have even seen her hanging out with Koala Puffs and Macdizzle on her channels. “With cannabis, because we’re still so small, there’s no room for drama or hate, really. We’re all just chill girls. It’s like, ‘Smoke a joint, get over it,’ you know?” 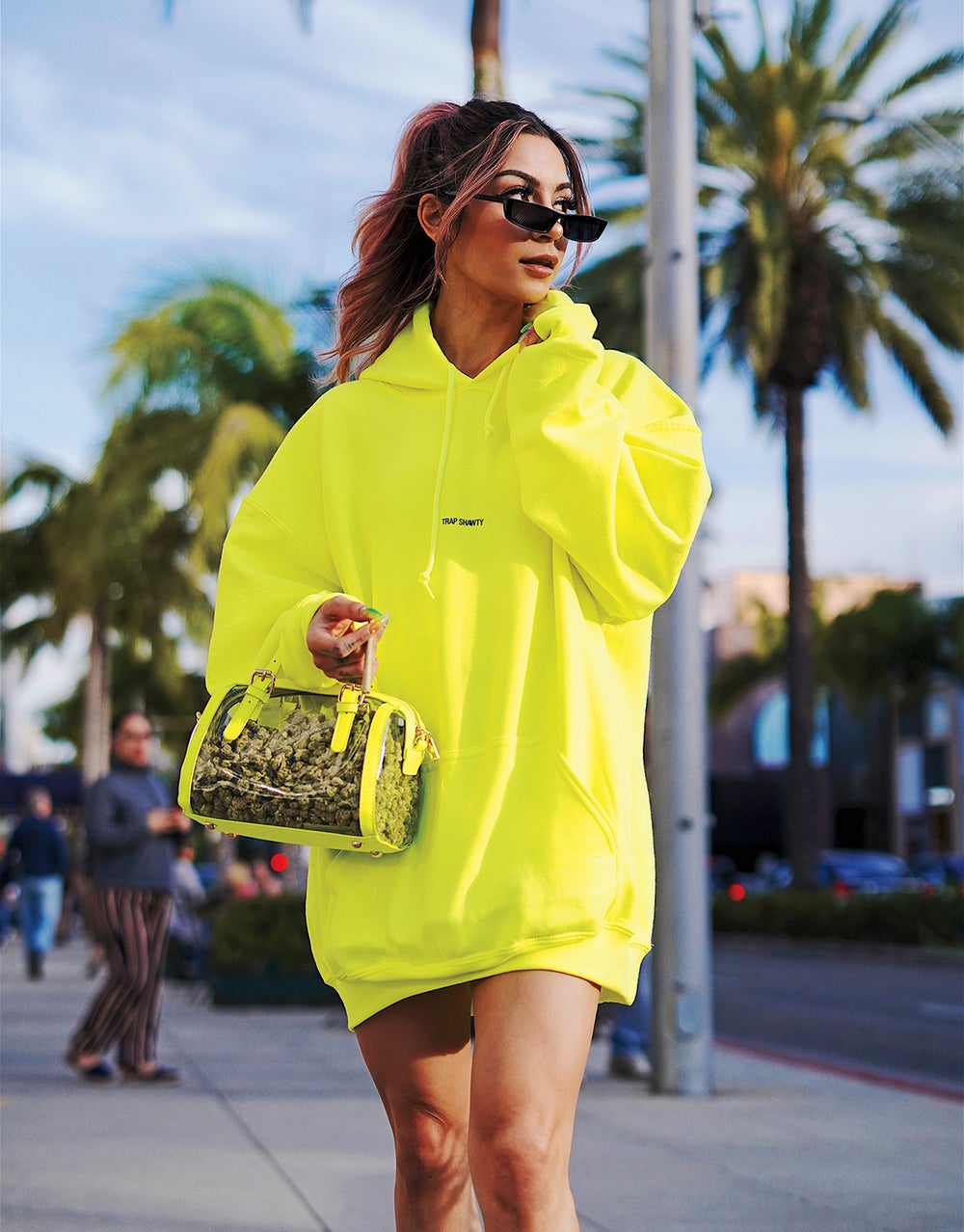 A former accountant, Teresa doesn’t want her last name public because she’s still fearful that her parents will find out what she really does for a living.

In It for the Long Haul

One of the big challenges cannabis influencers face is having their accounts deleted by social media platforms for violating their rules. It’s a gray area that nobody quite understands. For instance, Instagram’s community guidelines state: “You can’t do anything unlawful, misleading, or fraudulent or for an illegal or unauthorized purpose” but do not mention anything about showing drug usage or its promotion. Teresa says some of her content has been tagged in violation of the guidelines, but she’s unsure if it’s related to the content or just someone randomly reporting her for a separate reason. She says she doesn’t worry about it too much.

And her fans seem to like what she’s doing, based on her rising number of followers and interest from brands. As for her plans for the future, Teresa says she wants to continue to grow her influencer business and wait and see what happens. “I have so many ideas and opportunities right now,” she says. “I could sign with a social media agency; I could go the CBD route, or the beauty route. I recently had someone ask me if I want to start my own delivery service.”

For now, Teresa is just happy being an influencer making videos instead of an accountant punching a calculator. “I’m still pinching myself that all this is happening,” she says. “I get to travel the world and smoke weed for a living. If you would have told me three years ago that this would be my future, I would have said, ‘What the hell are you smoking?’ ”