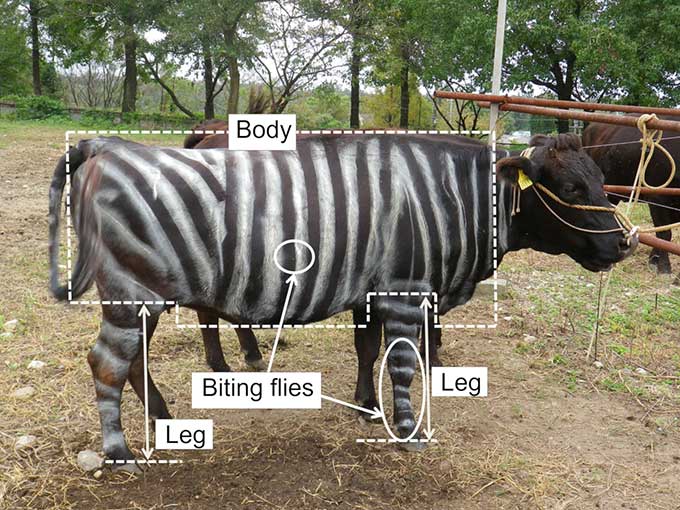 Zebras may have evolved their distinctive stripes as a way to interfere with flies’ vision. Flies have difficulty landing on black-and-white surfaces because the light polarization screws up their ability  to decelerate.

Recently, researchers in Japan painted black cows with zebra-like white stripes and discovered that flies stay away from them. Whoever painted the cows did good work, they look dapper.

A team of Japanese researchers recruited six cows and gave them each black-and-white stripes, black stripes and no stripes. They took photos of the cow’s painted right side, counting the number of bites as they happened and watching how the cows reacted.

While unpainted cows and cows with black stripes endured upward of 110 bites in 30 minutes, the black-and-white cows suffered fewer than 60 in the same period, researchers found.

Now the prairie dogs are out to get us

I think it’s fair to say at this point that the earth is rising up in self defense and will soon devour every last one of us.

Hey! Remember last month when the World Health Organization was like ‘nah, let’s not declare this outbreak of a viral hemorrhagic fever that’s killed over 1,000 people this time around a public health emergency of international concern’? They were afraid that the flow of aid could be impeded into the outbreak’s hot zone, located in […]

A man only identified as Peng, 37, from Zhangzhou, China, was admitted to the hospital with chest pains and coughing bouts. He eventually confessed to being a dirty sock sniffer. He reportedly jonesed for the stink of his own hosiery and the daily practice led to a fungal infection in his lungs. From Science Alert: […]