GW Pharmaceuticals (NASDAQ:GWPH) unveiled first-quarter financial results after the market closed on Monday, reporting revenue growth of 207% year over year to $120.6 million and a non-GAAP loss of $0.02 per share, which beat analysts expectations by $0.05 per share.

Surging demand for its marijuana treatment for epilepsy

The biotech company‘s revenue growth was due to surging sales of Epidiolex, a purified formulation of cannabidiol, or CBD, the second most common chemical cannabinoid found in marijuana. Growing use of Epidiolex by patients with the rare epilepsy disorders Dravet syndrome and Lennox-Gastaut syndrome resulted in net product sales of $116.1 million in the first quarter, including $106.1 million in U.S. revenue. 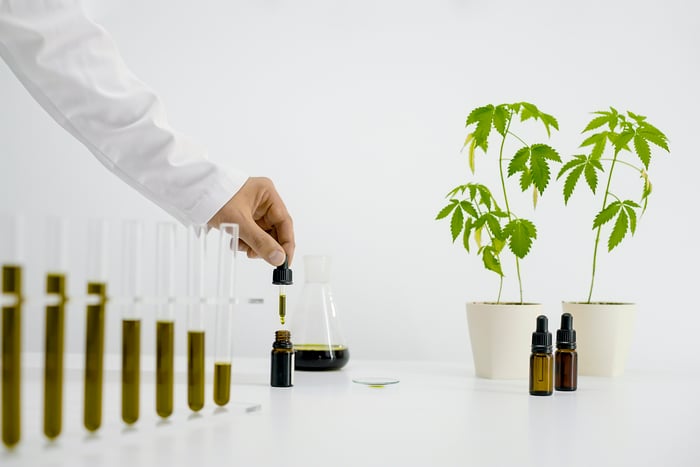 GW Pharmaceuticals remaining revenue came from Sativex, a THC-based drug approved in Europe for use in multiple sclerosis spasticity, or uncontrolled muscle spasms. Phase 3 studies of Sativex that could support a U.S. application for approval are expected to commence later this year.

The company’s $8 million net loss in the quarter was a significant improvement from its $50 million loss in the same quarter last year, because operating expenses, including research and development costs, grew much more slowly than revenue. Overall, operating expenses increased 41% year-over-year to $127.8 million.

Epidiolex revenue could continue increasing this year following successful launches in Germany and the United Kingdom. GW Pharmaceuticals also says it plans to make Epidiolex available in France, Spain and Italy later this year, too.

Additionally, management expects a Food and Drug Administration decision to approve Epidiolex for use in tuberous sclerosis complex (TSC) on July 31. Last year, the company reported that Epidiolex’s use reduced seizures caused by tumors in TSC patients by 48% in a phase 3 clinical trial. If approved, it could roughly double Epidiolex’s addressable patient population.