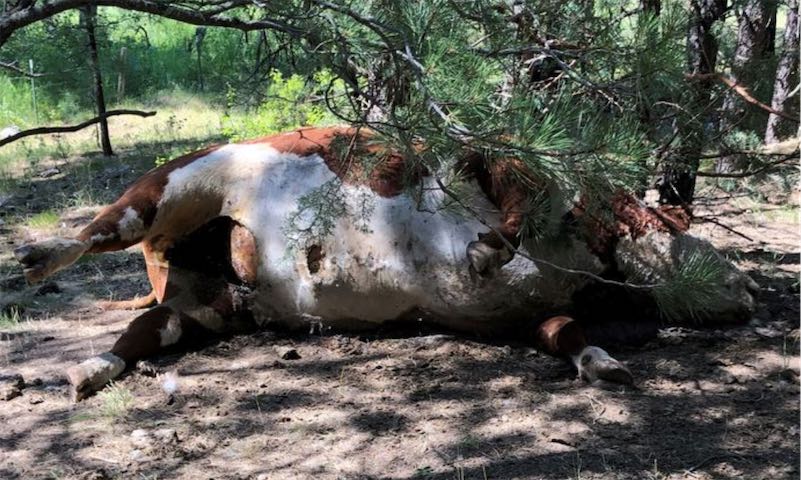 This summer on remote U.S. Forest Service land in eastern Oregon, cowboys discovered five, young purebred bulls dead, drained of blood, and their tongues and genitals removed with almost surgical precision. Who or what did this and why remains a mystery. (Insert “I’m not saying it’s aliens…” joke here.) Silvies Valley Ranch has offered a $25,000 reward for information that could lead to answers. From National Public Radio:

“A lot of people lean toward the aliens,” (Harney County Sheriff’s Deputy Dan) Jenkins says. “One caller had told us to look for basically a depression under the carcass. ‘Cause he said that the alien ships will kinda beam the cow up and do whatever they are going to do with it. Then they just drop them from a great height.”

Jenkins says the cases have been tough, with little evidence and no credible leads.

On his whiteboard, he has a running list scrawled in green marker with the top theories. What’s clear: It isn’t bears, wolves, cougars or poisonous plants. Nor were the animals shot.

The FBI won’t confirm or deny that it’s looking into the multiple slaughters.

In Northern California, sheriff’s deputies helped a large bear get out of a locked trash bin, which the bear somehow managed to get stuck inside while dumpster diving for dinner.

At Mysterious Universe, Paul Seaburn writes: In what can be considered an unusual convergence of conspiracy theories, a man who runs a Bigfoot videos YouTube channel was chasing chemtrails when he claimed to have recorded a UFO chasing them as well. If you’re playing Conspiracy Scrabble, ‘Chemtrail’, ‘Bigfoot’ and ‘UFO’ is a triple-word score. According […]