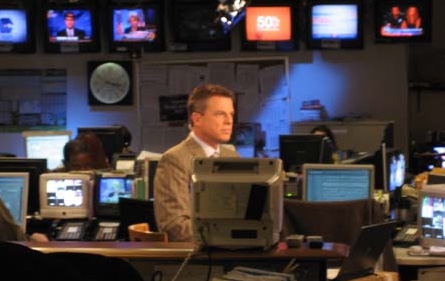 Sure has been one heck of a news week. And it ain’t over yet.

On air Friday afternoon on Fox News, anchor Shepard Smith (Shep Smith) told viewers he has requested that management release him from his contract, and says Fox has granted this request.

“Even in our polarized nation, it’s my hope that the facts will win the day,” he said in an on-air farewell.

“Recently I asked the company to allow me to leave Fox News and begin a new chapter. After requesting that I stay, they graciously obliged,” Smith said in a statement. “The opportunities afforded this guy from small town Mississippi have been many. It’s been an honor and a privilege to report the news each day to our loyal audience in context and with perspective, without fear or favor. I’ve worked with the most talented, dedicated and focused professionals I know and I’m proud to have anchored their work each day — I will deeply miss them.”

The unexpected departure takes place just a day or two after Fox big boss Rupert Murdoch is reported to have had dinner with Donald Trump’s manifestly corrupt attorney general and dirtywork-doer Bill Barr.

Why did he leave?

“Tensions with Fox’s opinion shows was the breaking point for Shep Smith, a well-placed source confirms” to Brian Stelter at CNN.

[NOTE: An NBC News reporter first reported that Smith was escorted out of the building by security, then removed and redacted the statement, saying it was an error.]

Sources directly familiar tell me many Fox News and Fox Business staffers were “shocked” when Shep Smith announced his departure on @foxnews, some were visibly upset. He was escorted out by security, per sources.

Fox plans to have a set of rotating anchors host his time slot. https://t.co/FfW2QUNaoD

JUST IN: On air, Shepard Smith says he has asked to be released from his Fox News contract, a request Fox has granted.

“Even in our polarized nation, it’s my hope that the facts will win the day…” he says in an on-air farewell.

“It feels like death in the news division,” a source told me of Shep Smith’s shock departure. The person said staffers at the network are “shocked” and that some were crying. “At least we had him,” the person said. https://t.co/eyAg5g4ldM

Sorry, but I’ve never been a fan of Shep Smith. He made a LOT of money from this thoroughly corrupt network, acting as cover for their propaganda, and unless he was stupid the whole time he knew that’s what his purpose was.

Shepard Smith, whose newscast on Fox News Channel often debunked statements made by Fox’s own opinion hosts, says he is leaving the network. https://t.co/YIoeMvZ86R

Statement from Fox, refuting what @jolingkent tweeted: “Shep’s exit from the building was planned and executed by Shep with Fox’s complete approval and the full support of Fox News – he was not remotely escorted out.”

Do Not Track was a standardized way for browsers to tell services that their owners did not consent to having their activities and usage logged; however, it was subverted by Big Tech and big media companies and turned into a useless tick-box that had virtually no impact on your privacy.

Yahoo Groups is being prepared for shutdown, with all stored archives to be deleted on Dec 14

The latest fuck-you from Oath — the Verizon division created to manage the zombie assets of AOL and Yahoo, bought at a ridiculous premium and then written down by more than 99% — is the impending drawdown of Yahoo Groups, with mass deletions of all stored “Files, Polls, Links, Photos, Folders, Calendar, Database, Attachments, Conversations, […]

In 2017, California passed a state law mandating disclosure of wholesale drug prices, something the Big Pharma companies fought tooth and nail. Now, the first of those disclosures has taken place, and it reveals spectacular levels of price-gouging from the pharmaceutical industry’s greediest monopolists: an overall rise of 25.8% in the median drug price since […]

As cool as your smartphone is, it can’t do everything. When a job requires a little elbow grease, a multitool is a great thing to have around – and might just save your life in the right situation. Here’s a roundup of some of the latest multitool designs, which have come a long way since […]

Whether you own or rent your place, insurance on that home is a necessary hassle – but a new tech-driven company called Lemonade is starting to show that while it might indeed be a necessity, it doesn’t have to be a hassle. Here’s the way insurance typically works: You pay premiums and hope an accident […]

People tend to keep luggage around for a long time. And why not? New suitcases are pricey, and no matter how banged up or patched up that old bag gets, it still holds your clothes. Right? Maybe not. Here are 15 travel bags and accessories that make a strong case for upgrading your gear. They’ve […]