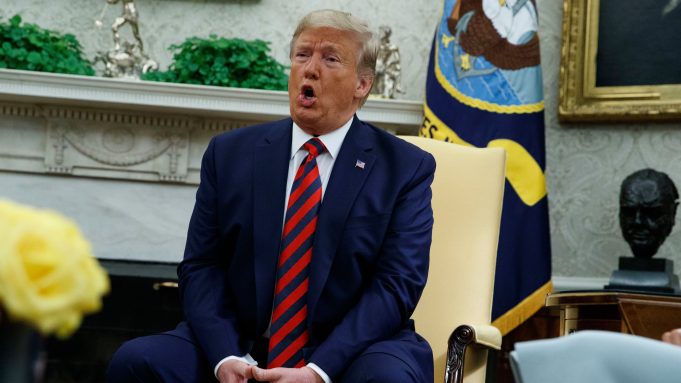 New York Times publisher A. G. Sulzberger wrote an Opinion piece in the paper today on how ‘President’ Donald J. Trump represents a “Growing Threat to Journalism Around the World.”

“In many countries, journalists are being targeted because of the role they play in ensuring a free and informed society,” writes Sulzberger.

“Many countries” includes the United States.

To give you a sense of what this retreat looks like on the ground, let me tell you a story I’ve never shared publicly before. Two years ago, we got a call from a United States government official warning us of the imminent arrest of a New York Times reporter based in Egypt named Declan Walsh. Though the news was alarming, the call was actually fairly standard. Over the years, we’ve received countless such warnings from American diplomats, military leaders and national security officials.

But this particular call took a surprising and distressing turn. We learned the official was passing along this warning without the knowledge or permission of the Trump administration. Rather than trying to stop the Egyptian government or assist the reporter, the official believed, the Trump administration intended to sit on the information and let the arrest be carried out. The official feared being punished for even alerting us to the danger.

Unable to count on our own government to prevent the arrest or help free Declan if he were imprisoned, we turned to his native country, Ireland, for help. Within an hour, Irish diplomats traveled to his house and safely escorted him to the airport before Egyptian forces could detain him.

We hate to imagine what would have happened had that brave official not risked their career to alert us to the threat.

Eighteen months later, another of our reporters, David Kirkpatrick, arrived in Egypt and was detained and deported in apparent retaliation for exposing information that was embarrassing to the Egyptian government. When we protested the move, a senior official at the United States Embassy in Cairo openly voiced the cynical worldview behind the Trump administration’s tolerance for such crackdowns. “What did you expect would happen to him?” he said. “His reporting made the government look bad.”

• The Growing Threat to Journalism Around the World [nytimes.com Sept. 23, 2019]

• Read Declan Walsh’s account of this incident: The Story Behind the Times Correspondent Who Faced Arrest in Cairo

Wow — NYT publisher says the Trump administration was prepared to sit back and allow one of its journalists to be arrested in Egypt. So the paper turned to the reporter’s native Ireland for help, and it was those diplomats who got him out — not the US.https://t.co/dWv4Bfuo5B pic.twitter.com/RGQ5uHWbRT

A.G. Sulzberger of @nytimes says “let me tell you a story I’ve never shared publicly before.” That story and one other raise unsettling questions about how the US government might respond when American journalists are under threat overseas. https://t.co/4HvKCq2SCk

I don’t know what would have happened if I hadn’t received that timely warning. Possibly nothing, and possibly a major problem. The workings of Egypt’s security apparatus are notoriously opaque under Mr. el-Sisi, even to Egypt experts.

To consider the implications, imagine for a second that this was a pastor, someone who enjoys the same First Amendment rights –>
Egypt planned to arrest a New York Times reporter. The Trump administration reportedly wanted to let it happen. https://t.co/Ax2ZJoxCBj

These shocking excerpts show the shape of protection, & disdain, for the press in Trump’s White House.

Brave govt official alerted @nytimes of the imminent arrest in Egypt of @declanwalsh, without Trump’s knowledge or permission or action. Ireland stepped in as the US wouldn’t. https://t.co/LUjiIK0KHB

“With these phrases, he has not just inspired autocratic rulers around the world, he has also borrowed from them.

“The phrase ‘enemy of the people’ has a particularly brutal history.“https://t.co/UggrKe2Dlf

Think about what this suggests: that the Trump administration was fine with allowing Egypt to effectively take a journalist hostage. WTF. https://t.co/wxqT78lAqO

Good designers know that a picture can be worth more than 1,000 words. It can also be worth a fair paycheck if you find the right image. That’s why you might want to take advantage of these premium stock photo services, both offering access to thousands of original pics and both on deep discount this […]

Need earbuds that can last and don’t sound like they’re underwater? These Bluetooth earpieces can compete with the sound of AirPods and Beats Pro for a fraction of the price. From sleek ergonomic tech to long-lasting audio that’s perfect for a hike, there’s a set here for every lifestyle. CRESUER TOUCHWAVE True Wireless Stereo Earbuds […]

There are three baseline requirements for any graphic designer: Imagination, fluency with the Adobe Creative Cloud, and the ability to draw a straight line. As a matter of fact, the programs in Adobe CC are so intuitive these days that the last one is probably negotiable. Which is why if you’re looking to land a […]